Like many organically grown and often family-owned SMEs, this engineering company also faced the problem of adapting its capacities or rather its production environment to the positive economic conditions.

On the one hand, the decision to expand a 50-year-old production hall was made in advance, on the other hand, also to invest in new equipment, in particular a state-of-the-art paint finishing system.

Due to the space requirements of the latter, as well as because of the enormous growth opportunities of a business area, a transformation of the production site was required and finally realized with our support.

As a consulting company that is acting, thinking and breathing LEAN, we have of course applied these principles to this company and tried to adapt all the considered aspects accordingly or rather to make the processes more efficient, in line with the LEAN approach.

An initial analysis of the existing production showed that the delivery time can be significantly reduced. For example, IMIG has launched a very ambitious project with its customer: "Delivery time 1/2." Based on the experience of two decades of successful industrial consultancy, we were keen to set an audacious target, by using the so-called "LEAN Production" concept.

What is Lean Production?

LEAN Production (NB: it’s a subdomain of LEAN Management) refers to both the economical and time-efficient use of the production factors of operating resources, personnel, materials, planning and organization in the context of all corporate activities. In other words, it is about improving productivity, optimizing product quality, and increasing flexibility in production, with the aim of reducing so-called waste of resources, increasing efficiency, optimizing production time, minimizing costs, and thereby ultimately increase the customer benefit.

An essential factor in this concept, however, is also the avoidance of waste. These are above all the unnecessary activities, such as scrap, rework, too long transport routes, multiple collection of data, a multiple handling of material, redundant stocks, etc. Ultimately, however, improvements from a LEAN project always become visible for or arrive at the customer.

First and foremost, the individual process steps were analyzed in detail, time records for the processing, production and assembly times were carried out, as well as the entire process from order receipt to order confirmation, to the creation of an order, to production, to the delivery.

From an in-depth data collection and analysis of the existing manufacturing and assembly, many findings were obtained, which were evaluated in detail by applying the LEAN approach. One of the challenges of this project was certainly the enormous complexity and variety of parts of the products.

In order to achieve a more flexible manufacturing, it was clear that we should change it as quickly as possible from the job-shop organization (high stock), to made-to-order production (no or very low stock). Thereby, e.g. the variants of a semi-finished product have been reduced from originally 84 to 29, within a few months, with the aim of having no semi-finished products in stock, at the end, but ideally only order-related, i.e. to manufacture only based on orders.

At the layout of the new production island we did not only ensure that the paths were short and the number of handlings as small as possible in order to produce the product as efficiently as possible and to optimize the flow ("flow production"), but it was also important to reduce the waste, as well as to decimate possible sources of errors. For this purpose, an extensive analysis of the small and purchased parts was conducted, which led to a significant reduction of the number of own prefabricated items as well as purchased parts, from about 400 to approx. 230. It was also important to implement another aspect of the LEAN approach, namely to separate value-adding from non-value activities, in this case the production from consignment.

In that way it became possible to create a visually appealing and ergonomically significantly improved workplace, with noticeable improvements in material handling (just in the spirit of LEAN Production), that was also reflected in the feedback from the workers in the production island, which was very positive, who stated e.g. "We like that very much because it is much clearer and tidier. This has become a really nice workplace."

The importance of a good structure, the order and ultimately also a clear labeling, in terms of efficiency and error reduction, should not be underestimated. At the end of the day, a LEAN project was successful when not only the client but also the employees were satisfied, which ultimately also benefits the customer. 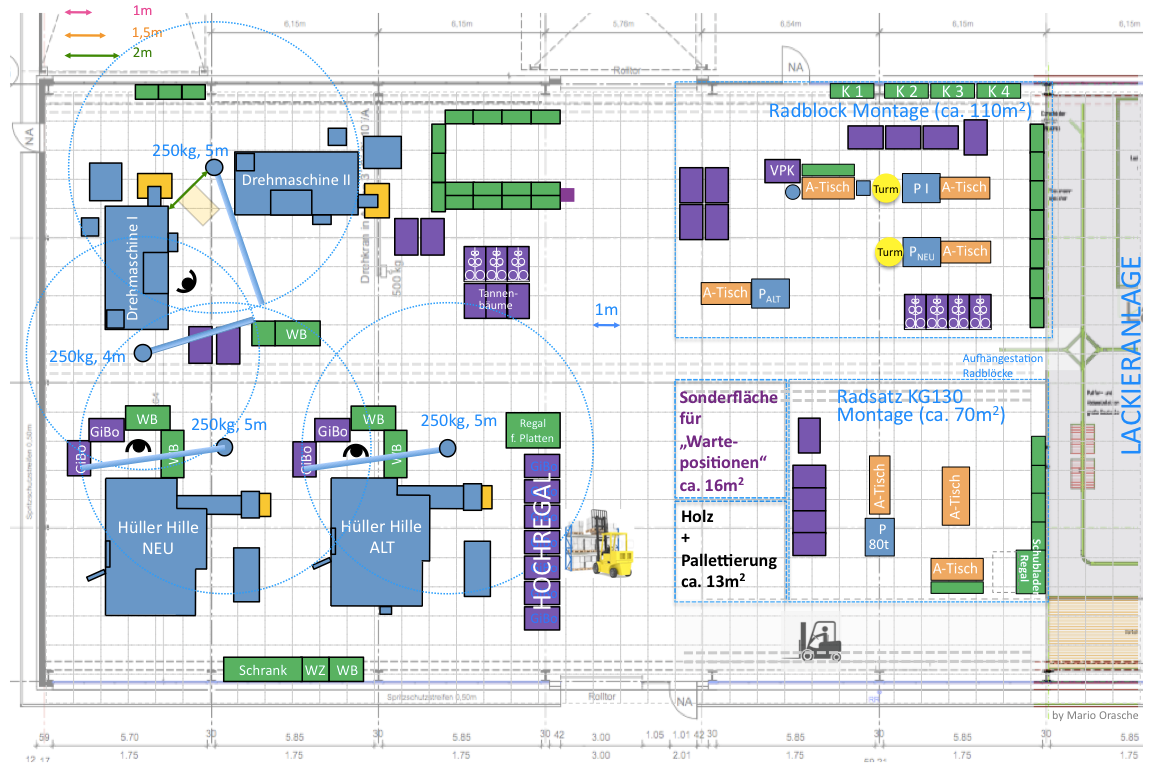 As far as it is concerning the "delivery time 1/2", we have not totally realized this goal so far, but we know that with the delivery of the missing new machines, the production bottlenecks will be eliminated and the ambitious goal will be realized. However, substantial positive "side effects" have already been realized, and the volume output in the first half of 2018 YOY increased by about 20%, while the turnover of that business are increased even by 40%, in the same period.

Copyright © 2021 IMIG AG. All Rights Reserved.
PrivacyImprint
This website uses cookies to ensure you get the best experience. Learn more about it.
Accept
I disagree
Search